“Vinho Verde” the name can be confusing because it is a region and it is also a wine, a very popular white wine produced in this region.  A lot of like Champagne, it is a town in France and it is also a wine.  With access to more than 70 markets worldwide, Vinho Verde is Portugal’s biggest wine province, producing an average of 92 million liters yearly.

Formerly known as Rios Dos Minho, this region isolates itself in the far northwest up against the Spanish border.  Very much like American Pacific Northwest temperatures: mild winters and cool summers, with a summer average temperature of 68°F. Rain is known mostly in spring and winter months, and coastal regions like Cávado and Ave are blessed with a cooler marine influence, while inland regions are slightly warmer.  Due to the lack of heat, with major coastal influence, grapes grown along the coast yield lower in alcohol, green and light. 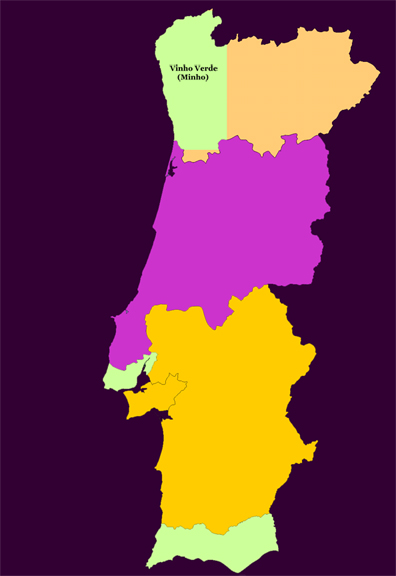 Hugging the Spanish border, with Rias Baixas as its neighbor, Vinho Verde shares similar terroir.   The diversity of Vinho Verde’s wines is owed to big differences in altitude, elevation starting at sea level, with the highest vineyards planted at 2,300 feet altitude. The granite-based soils contribute to the shared features of these wines, the lively quality and youthful fruit for which they are so well-known.  The granite soil contributes just a faint mineral scent creating a refreshing yet interesting wine. While the vignerons of the region know more than 30 grape types, there are just a few that achieve excellence in this terroir. Alvarinho (a misspelled version of the Spanish Albarino) is renowned for its floral nose, the mineral acidity and the apricot and sweet citrus aroma.

The wines of Vinho Verde are light and fresh, generally lower in alcohol, making them an excellent pair for food. With a hint of spritz, they are not considered sparkling wines, low level of CO2 pressure making them distinct and unique. While the whites are lemon colored, the reds are deep red and tannic, and rosé wines are fresh and fruity. Depending on the sub-region, flavors can differ; Vinho Verde is splitted into nine sub-regions: Amarante, Ave, Baião, Basto, Cávado, and Lima, Monção e Melgaço, Paiva and Sousa.

Characterized by numerous small producers, Vinho Verde is famous for Vinho Albariño, made with Alvarelhão grapes; this popular wine is marked by tropical aromas and friendly alcohol, around 12% or less.

Exporting Red Vinho Verde is rare and pretty much unheard of, outside of this region, Vinho Verde is only known for white wine, but not so much for its Reds. Vinhão and Borraçal are the most well-known red grapes, used to produce wines with peppery notes and deep purple complexion.