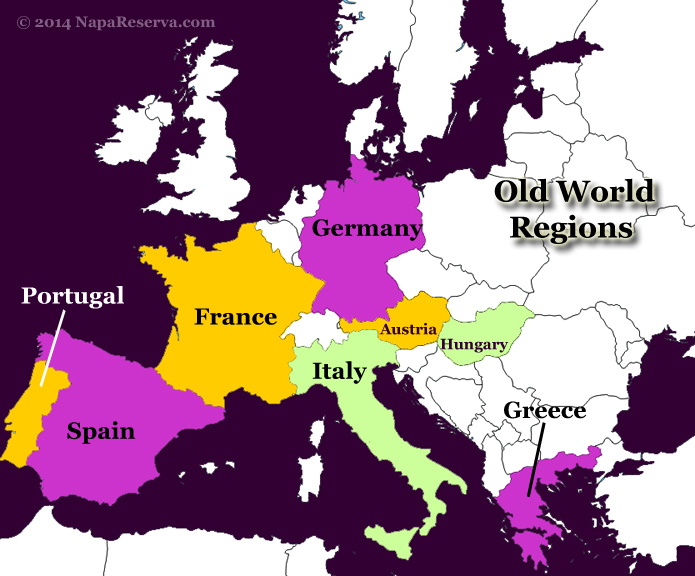 If you have been around wine enough, you probably have run cross two phrases “New World” and “Old World” wine (or region).  “New World” and “Old World” are indeed geographic terminologies used to describe two major ecozones on earth.  New World consists on all countries on Americas, Australia Continent and Island countries in the Pacific.  The rest of the world is considered Old World.

The same goes for Wine, grape growing regions and appellations, with the exception for South Africa, it is part of New World Wine.  Since all of the Old World wine regions locate in Europe, it becomes synonymous that Old World wine is practically European wine.

For complete list and detail information on each growing region of Old and New World, visit our GROWING REGION SITEMAP

There are many significant differences between Old and New World in viticulture and wine-making philosophy.  Most of Old World growing regions are regulated, some more strict than others.  Only certain grape varietals can be grown in certain area, there could be limit on yield per acre, alcohol content and even quality indication.  In contrast, New World regions are more flexible, many don’t regulate the type of wine produce by certain regions, how wine is produced, especially there is no quality indication.

When it come to the actual Wine, New and Old World do share some similarities, but for the most part, they showcase rather unique personalities bringing more excitement, curiosity and even competitiveness to wine lovers as well as winemakers themselves.  A Cabernet Sauvignon from California (new world) could taste so different of the same Cabernet Sauvignon from France or Spain (Old World).  Old World wine tend to be more acidic, lower in alcohol content, with subtle Oak but more obvious notes of minerals and earthiness.  On the opposite side, New World Wine is more fruit-driven, higher in alcohol, less acidic and sometime heavily Oaked.

It is impossible to say which one is better.  Not only it depends on personal preference in taste, but on which season in the year, on special occasion, and mostly importantly on what mood you’re in.  Falling in love isn’t hard, but having to choose side! …will just have to wait and see.  Cheers!