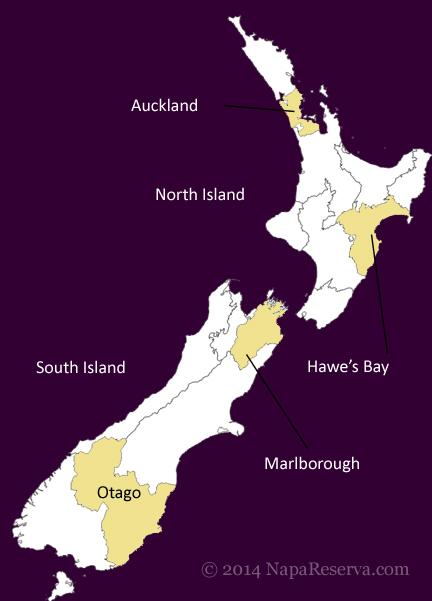 North Island is the smaller of the two main islands in New Zealand, the mountain ranges lay as the backdrop for this tropic-like island.  Soil consist of mountain run-offs, such as sand, limestone, chalk and some clay.

It is hotter in the North end of the Island, with some maritime influences, tropical weather brings in high humidity and rainfall.  The temperature drops lower towards the south side of the island.

Spread across a large and peculiarly diverse area, the Auckland wine region encompasses the unique vineyard island of Waiheke, the historic West Auckland regions of Henderson, Kumeu/Huapai/Waimauku, north along the coast of Matakana, and south to Clevedon’s hilly terrain. Award-winning Gewürztraminer made with zest has become a trademark for the area. Forceful reds such as Bordeaux-mixtures in the north.

Auckland is where New Zealand wine got started.  Decades ago, half of all production came from this area.  Nowadays, production declined dramatically, but it made up in quality.   Warm maritime air combined with dense clay soil, the region prove success for Bordeaux varietals such as Cabernet Sauvignon and Merlot.

Hawke’s Bay iso one of the largest, 2nd only to Marlborough.  The region is the driest, sunny and warmest in all of New Zealand.   Wines from Hawke’s are known to be very ripe, fruit-driven and aromatic.  Renowned for its sunny hills, Hawke’s Bay is the home to the most exquisite reds and whites. The area is best known for its Bordeaux-mixture reds and its Chardonnay. The Aromatic whites are unfailingly virtuous and its Cabernet Sauvignon and Syrah are becoming more popular each day.  Volcanic Hills, Ngatarawa Wines, Ash Ridge Wines, Monowai Estate Limited and Hopes Grove are some of the most popular wine producers of the area.

Who likes aguachile? 🇲🇽 😝 This was so fir