Taking its name from the river Mosel, the most famous wine region of Germany is also the third one in terms of production, and probably the most visited of all German wine provinces. Marked by Mosel’s tributaries, Saar and Ruwer, the borders of this region are peculiarly shaped, and the landscapes are surprisingly dramatic. Archeological proof attests that winemaking has a long tradition here, beginnings dating over 2000 years ago, making it oldest wine region in Germany. Associated with some of the best white wines in the world, Mosel’s famous Riesling is also planted in the town of Bremm on the steepest slopes ever recorded.

Dominating the geography of the region, Mosel River and its tributaries have a major contribution to the province’s terroir; most vineyards are planted on the river banks, on terraces and steep slopes, where they get a perfect amount of humidity and exposure to the sun; though the region’s continental climate is characterized by cooler summers, the colder ripening days are conveniently warmed up by the sunray’s water reflections, phenomena that also help maintaining a certain level of humidity. Due to low temperatures, sunlight and warmth are at high demand here, therefore south and south-west growing areas are thought to be the most productive regions. Soils of the region are poor and covered with porous slate, a lot of the vines being rooted directly in the fragmented slate. Due to the longer ripening season and the mountainous terrain, red varieties are almost unknown here, leaving a lot of room for white varieties. Though rich in micro-climates, Mosel is associated with acidic whites, usually light and low in alcohol; wines of the region have much in common, they are moderately sweet and with a desirable mineral twist.

Mosel’s dramatic landscape is dominated by Riesling, making up close to 2/3 of all grapes grown in the area.  It is considered the most esteemed grape of the region, followed closely by Muller-Thurgau, only because of its low resistance to cooler temperatures. Due to the northerly position of Mosel, Riesling wines are crisp, with flowery aromas and a perfect amount of acidity. Being a fastidious grape, winemakers try to substitute it with other varieties (ex: Kerner), to make a less expensive and easier to produce wine. 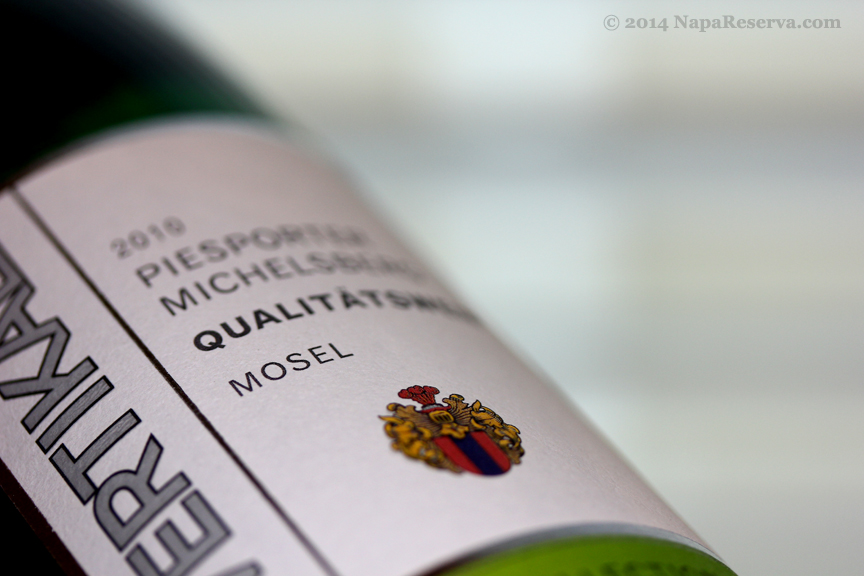 Regarded as the hardest to maintain, the vineyards of Mosel come with a very big disadvantage. Because of the steep inclination (going up to 65 degrees), the use of modern harvest equipment becomes impractical; some vineyards need up to seven times more hours of manual labor than a flat-land estate. Heavy rain, and long snowy winters often cause terrain erosion, forcing workers to collect the slate, and carry it uphill to avoid exposure of the roots. As an advantage, the steep angle of the plantations allows more exposure to sunlight and warmth. With all the efforts, Mosel’s terroir produces 91% white varieties, the ripening season being too cold for red grapes; aging well for fifty-sixty years, the wines of Middle Mosel are renowned for their complexity, considered to be the finest of the German wines.