Wines of the United States 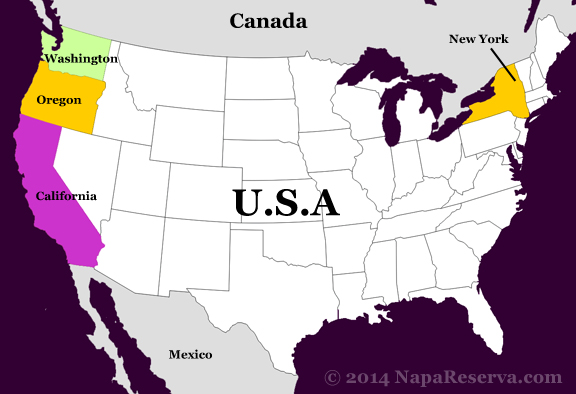 Supported by a lengthy and troubled tradition, American winemaking has reached a self-evident level of excellence. The wine culture of U.S.A. can be traced back to the early 17th century at the beginning of European colonization. Native vines did not match the quality or style the settlers were accustomed with, and as a result, the first grape plantations that flourished originated in the Mediterranean regions of Europe. Scuppernong and Vitis vinifera were the first vines planted by the colonists of the American States. Suffering from several serious setbacks, such as the outbreak of phylloxera, followed by the Prohibition and the great depression, wineries did not reach the status of producing premium grapes until the late 1960’s. The combination of several significant factors: the perfectionism of vintners, the dry but resourceful soils, and superior grape types, lead the wine industry to its current much-admired levels. With the U.S.A. being one of the biggest wine consumers in the world, vintners have found a way to produce wine in all the 50 states. However, 95 % of the production comes from just four of the states. California produces approximately 80% of the total production, five times the joint total of Washington, Oregon and New York, which are the 2nd, 3rd, and 4th ranking producers.

As a symbol of the American freedom of choice, U.S.A. wines do not follow a certain taste or color palette, as the French or Italian counterparts. Suitable for a wide diversity of wine drinkers, the array of flavors and colors is boundless. There are a number of native grapes still cultivated on the North American continent, maintained mostly as symbolic custom, or for limited local consumption. It is the imported grapes, mainly from Europe, that are used to produce the internationally appraised wines. Both domestic and international wine lovers are exposed to every type of wine on the market, fresh and simple, aged and thick, it is truly amazing how broad the wine production is in USA.

With mountains, valleys, steppes and plateaus, California’s geography is as multifaceted as its climate, offering winegrowers a puzzling choice of terroir. This beautiful state is the home of two types of winemaking.  Modern production, taking place in some of the world’s largest wine companies, and the cozy more traditional, yet professional boutique wineries, where the wine is basically homemade. The entire state benefits from a series of microclimates, due to its geographical diversity. As a rule, the cooler the temperatures, generally occurring in provinces closer to the coast, the more the areas are suited for Pinot Noir and Chardonnay. Further inland, where the weather is much dryer and hotter, the climate and soil are more suitable for the world renowned Cabernet Sauvignon, also known as California’s trademark. Less well known are the native and European blends, produced mainly for local consumption. If you are a wine lover you will find yourself in a vignerons utopia, amongst the most famous wineries in the world: Moet & Chandon’s Domain Chandon, Taittinger’s Domain Carneros, and Louis Roederer’s Roederer Estate in the Anderson Valley and Mumm Napa in the Napa Valley, just to name a few.

Naturally, wine has an intense synergy with food; therefore, California has developed a fantastic food industry, with no international rival for quantity and quality combined. From gourmet meals to sophisticated picnics, wineries will offer you truly splendid food pairings.

As this amazing journey continues, the next stop should be up the West Coast to Oregon. With a thriving wine industry, its signature grape is Pinot Noir. With a complex flavor and silky tannins, this wine is only at its best when well-aged. The Oregon Pinot Noir is food friendly and versatile; it pairs well with everything from cheese and chocolate to Peking duck and Roasted Beef Tenderloin.

Keep heading up north to Washington, a state where varieties of grapes are found in more equal proportions. Distinguished for Chardonnay, Riesling, Merlot, Cabernet Sauvignon and Syrah, Washington has much more diversity to offer. Worn like an insignia, Riesling is one of the fastest growing varietals on the current wine market. As it easily complemented, Riesling can be paired with spicy food, Middle eastern or Mexican Cuisine and even deserts salads and strong flavored dressings.

All the way across the country, on the eastern coast, New York is home to some of the most famous wineries in the world.  This populous state’s most appraised wines are made from Riesling, Chardonnay, Pinot Noir, and Franco-American hybrid types such as Vidal Blanc. New York’s food options are endless, and its wines are just as versatile and diverse. From the impressive city of New York, the large suburban areas, and to the natural landmarks, this state will take over your senses, and bit by bit you will fall in love with it.